We finally set sail. It was daunting and exciting all at the same time. As we cleared harbor the work began. This is a tall ship with 13 sails. Nothing is automated. She was built originally in 1911.

There are 8 guests on board. A German couple Stephan and Beate. It was Stephans 50th birthday so Beate surprised him with a trip across the Atlantic when he expected a weekend on a tropical island. Another elderly German couple and a middle aged German traveling alone are also with us along with a Spaniard and a lady from Norway.

The crew (ten of them) are all in their twenties or thirties except for the captain and a senior deckhand who are in their 50s and have been sailing their entire lives. The chef is a Spaniard. She only feeds us very healthy food which I just eat with little enthusiasm.

The first thing to do was to deal with emergency procedures which were explained in detail. I was just happy at this stage that there in fact were some. We also had to climb into a full body Michelin survival suit which I did. It did however dawn on me that should it be required I am just going to not bother and just jump.

I have bumped my head into the bulkhead at least 3 times today.

Setting sails on a tall ship is no easy task and was exhausting. I threw my back into the pulling and hauling as did everybody else. The ship was pitching and rolling from the get go. I felt only respect for this young enthusiastic crew. Within an hour of leaving all the guests began dropping like flies. Seasick. Every one of them except me. Even some crew members including a recently graduated Doctor got sick. I expected to get sick but I just didn’t. I was the only guest at dinner.

I realized virtually immediately that in order to get through this journey I needed to get involved. There are not going to be any drinking games or parties to keep me occupied. The crew are not allowed to drink on the ship. This vessel is similar to a training vessel and the crew are extremely willing to teach which I was going to exploit. All the tasks on board seemed impossible but I knew each day would bring me closer to conquering my fears and these tasks.

I looked up at the two tall masts dismayed at the crew who climbed all the way to the top to release the top sails. This I feared. They are like acrobats. Ren and Agata the two young crew where amazing at dancing around the sails. I wonder if I could even climb up the mast stays.

We were moving at over 6 knots in fairly rough weather.

I went to bed hoping I would not awake sick. 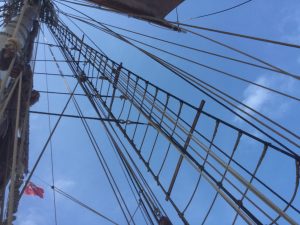